One of my favorite photos. Members of the South Korea Baptist Woman’s Missionary Union perform a traditional fan dance in Owensboro in 2007. (With thanks to Joy Bolton for finding my original .jpg!)

The act of walking the aisle of a church to convey publicly a spiritual decision is rooted in mid-19th century America, and, many say, by way of the Gospel of Matthew.

Kentucky church growth experts Dan Garland and Thom Rainer agree that in Southern Baptist and other evangelical churches, baptism is considered by many as the ultimate act of public confession. Nevertheless, aisle-walking remains a “first step” of faith for many new believers.

If anyone could be dubbed the “father” of the altar call, it probably would be Charles Finney. The University of Virginia American Studies program provides one of many summaries of Finney’s background and ministry.

A Connecticut native and one-time lawyer, Finney was ordained a Presbyterian minister in 1824. By 1830, he was one of the major figures of the Second Great Awakening—a period of Christian revival with Kentucky as one of its epicenters.

Encouraging listeners to repent and accept Christ as Savior, Finney would invite them to the “anxious seat,” also known as the “mourner’s bench,” at the front of a church or whatever gathering area was being used.

At the anxious seat, men, women and children would receive prayer and counsel from a pastor or other church leaders.

From the anxious seat came the “inquiry room,” a method brought into prominence by evangelist D.L. Moody, according to Daniel Whitesell’s book, “Great Personal Workers.”

When a message came to a time of decision, people who felt under conviction were led to a room away from the larger crowd where they could be counseled personally.

Some biographers tell the story of a Sunday night service in Chicago in 1871 that led Moody to emphasize immediate public decisions.

Reportedly, he asked the crowd gathered that night to ponder their spiritual condition and return the next week to further explore any decision they needed to make. But the infamous great Chicago fire broke out during the service, scattering the congregation and burning the church. There was no opportunity to regroup the following week.

Evangelist Billy Graham’s stadium-sized altar calls testify to the acceptance and effectiveness of the method, but pastors and biblical scholars are quick to point out that the act of walking an aisle or repeating a collection of phrases cannot be equated with a heart-felt acceptance of God’s grace through Christ.

“People can respond to Christ anywhere,” said Dan Garland, head of evangelism for the Kentucky Baptist Convention. “I think the best venue of response is in the home—parents leading children to Christ, or children leading parents to Christ. Then, they come to church to have that decision affirmed.”

The story I’m posting is very meaningful to me, and not just because it garnered a first place award from the Baptist Communicators Association. Although that was really cool! This story, about the common practice of “walking the aisle” in evangelical churches, was a milestone in my writing career. I was early in my tenure at Western Recorder, the weekly newspaper of Kentucky Baptists, and then-News Director David Winfrey was about to become perhaps the most important writing mentor I’d ever had, even though he didn’t know it at the time. Here’s the story:

Each Sunday, a group of worshippers scattered throughout various churches experience clammy hands, suddenly-sweaty brows and hearts hammering so hard their owners are certain everyone can hear.

These might resemble the symptoms of cardiac arrest, but for some people there is another cause for such discomfort: having to walk the aisle to join a local church.

While the tradition of walking the aisle dates back only about 150 years, for most Kentucky Baptists it is as time-honored as vacation Bible school and potluck dinners.

Kevin Hamm, pastor of Valley View Baptist Church in Louisville, recently asked whether tradition had become a barrier for some of the shyer souls who wanted to join the church.

“If we had people write down their five greatest fears, for a lot of them, their first fear would be standing up in front of a large group of strangers,” Hamm said.

That “short trip” down the aisle might be a journey some guests are unwilling to take, not because of their spiritual condition, but because they fear feeling the eyes of an entire congregation on them.

“Just because someone is afraid to walk the aisle doesn’t mean they are a closet Christian or not a sold-out believer,” Hamm said.

The extent of this fear was driven home, he said, while visiting a couple who frequently attended Valley View, but never had joined.

“They said they would probably never join the church because their fear of walking down the aisle was so high,” Hamm recalled. Approximately 2,300 people attend the two services Valley View hosts each Sunday.

The couple’s comments bothered Hamm enough that he wondered how visitors and regular attendees would respond if they could become church members without walking
the aisle.

To answer the question, church leaders scheduled a Commitment Sunday in January. Using a detailed bulletin insert and follow-up strategy, Valley View offered people attending the worship services that day a chance to join “from the pew.”

The bulletin insert directed people to indicate if they were joining through a statement of faith in Christ, a transfer of membership from another Baptist church, or if they wished to make a first-time profession of faith in Christ.

Hamm recalled that after the second morning service, he went to the church office to discover a small stack of inserts on his desk. Encouraged by the number, he said he was “amazed” when someone pointed to another desk with a large pile of inserts yet to be sorted.

In total, 152 people joined Valley View that Sunday. Of those, 96 new members already were Christians. The other 56 made first-time professions of faith, were enrolled in a new members’ class and were counseled regarding baptism.

Hamm said every new member received follow-up visits. A few cards referenced people who couldn’t be found, so they were not included as new members.

“They (Valley View) have tapped into an alternate response that our churches might do well to offer from time to time,” said Dan Garland, leader of the Kentucky Baptist Convention’s church development and evangelism team. “Having people immediately available to follow up with these folks is imperative.”

With appropriate follow-up, a from-the-pew opportunity does not circumvent a public confession of faith in Christ by a new believer, he said.

“The public profession is the time of baptism rather than aisle-walking or filling out a card,” Rainer said. “I’m not as concerned as to the mode of decision as the opportunity of decision,” he added.

Through research and consulting with “hundreds” of churches, Rainer said he believes there is “anecdotal evidence” that points to a reduction in altar calls in Baptist churches. “I have known some large churches that have commitment times once a month or once a quarter,” Rainer said. “I’m concerned about those people who have a sense of conviction other than at that time.”

Noting there is “no hard data” at this time to support such a trend, Rainer said the decline in baptisms in Southern Baptist churches could be a result of providing fewer opportunities for worshipers to share spiritual decisions with others.

“I don’t have an answer as to why we’re moving away from a time of decision in a service,” he said. “I believe that every message, every service, should lead toward a decision. There should be some opportunity for response.”

But, in some cases, a reprieve from aisle-walking could provide an opportunity for a clearer understanding of salvation for some people, he said. Aisle-walking “serves a purpose very well that is often misused,” Rainer said.

“On the one hand, it is a time of affirmation to see decisions that have been made. On the other hand, theologically, some of our church members equate walking the aisle with salvation.”

A 2004 study by his Rainer Group research team asked a group of current church members “diagnostic” questions about the method and meaning of salvation.

Rainer said the results found many “unregenerate” members who did not have a biblical view of salvation through faith in Jesus Christ.

“We found that around 45 percent were probably unregenerate members,” Rainer said. “I emphasize probably. We cannot know the true heart condition of a person. No kind of research can know with certainty matters of salvation.”

Providing different methods of response could facilitate a better understanding of the gospel, he said.

Hamm said he is also concerned that visitors, regular attendees or even church members are misunderstanding basic facts of faith.

“(Baptists) have to be very strategic and thorough in our follow-up from the altar to the baptismal waters,” he said.

Hamm, Garland and Rainer agree that aisle-walking is here to stay and that the tradition has many positive aspects.

“It’s an encouragement to the church body to see how God is working in a service,” Rainer said.

“I believe in walking the aisle,” Hamm said, noting that on Valley View’s Commitment Sunday, when worshipers had the option to join from the pew, a number of people still walked the aisle in response to the invitation.

He said the church might offer the bulletin-insert approach once or twice annually.

“We have to meet people where they are. We think you have to get saved at church or at youth camp,” he said. “The key is to find creative ways people can respond to Christ.”

Want to see the layout? Here’s the .pdf: bcainterpreporting 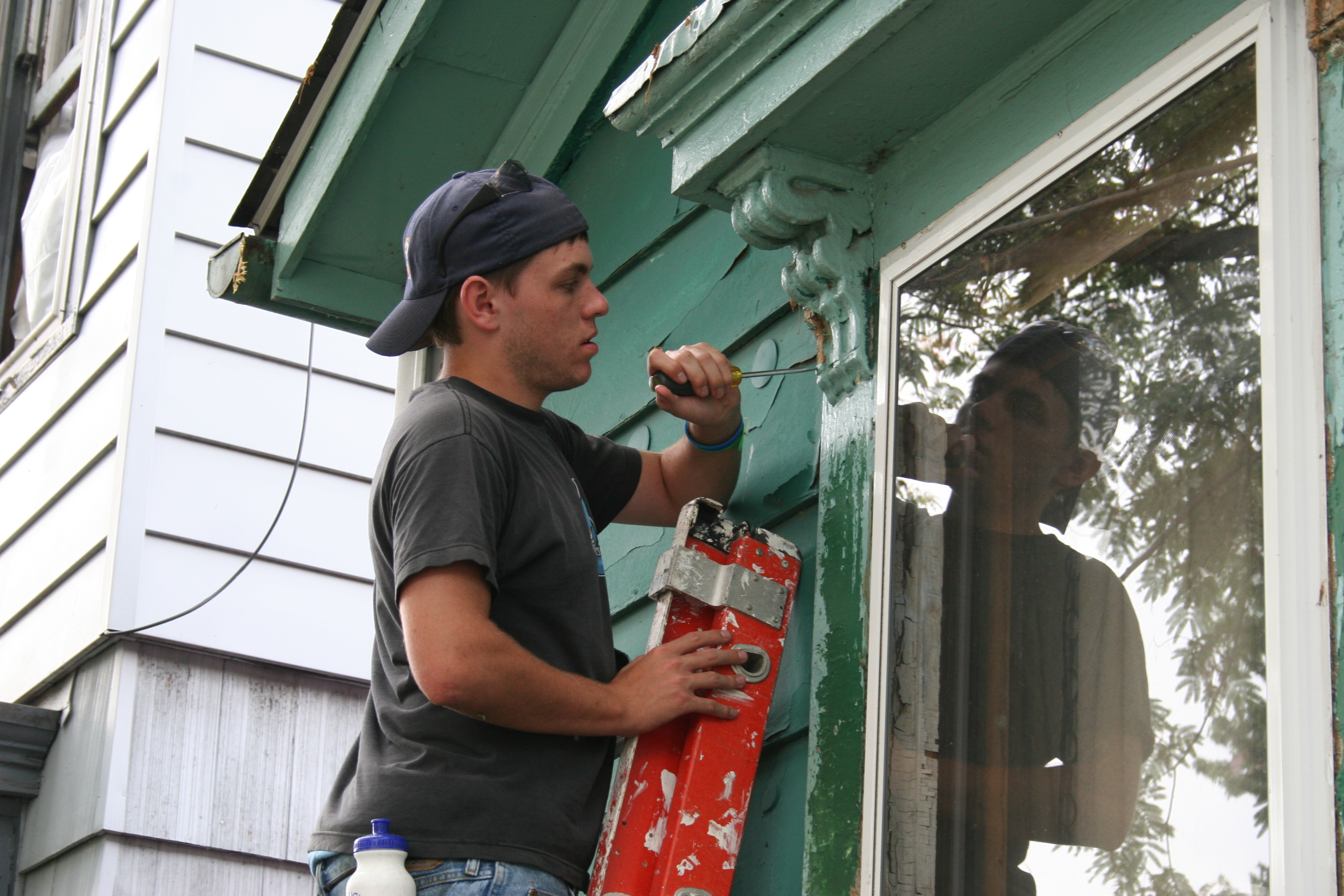 Kentucky Changers is a youth missions endeavor that brings high school students together in the summer to provide free, quality home maintenance and repair services to people in need. Most students are from Kentucky, but in July 2006, Erik Filyaw of Columbus, Ohio, joined a team serving in Louisville to paint and repair an elderly woman’s home. (Originally published by Western Recorder 7/18/06)