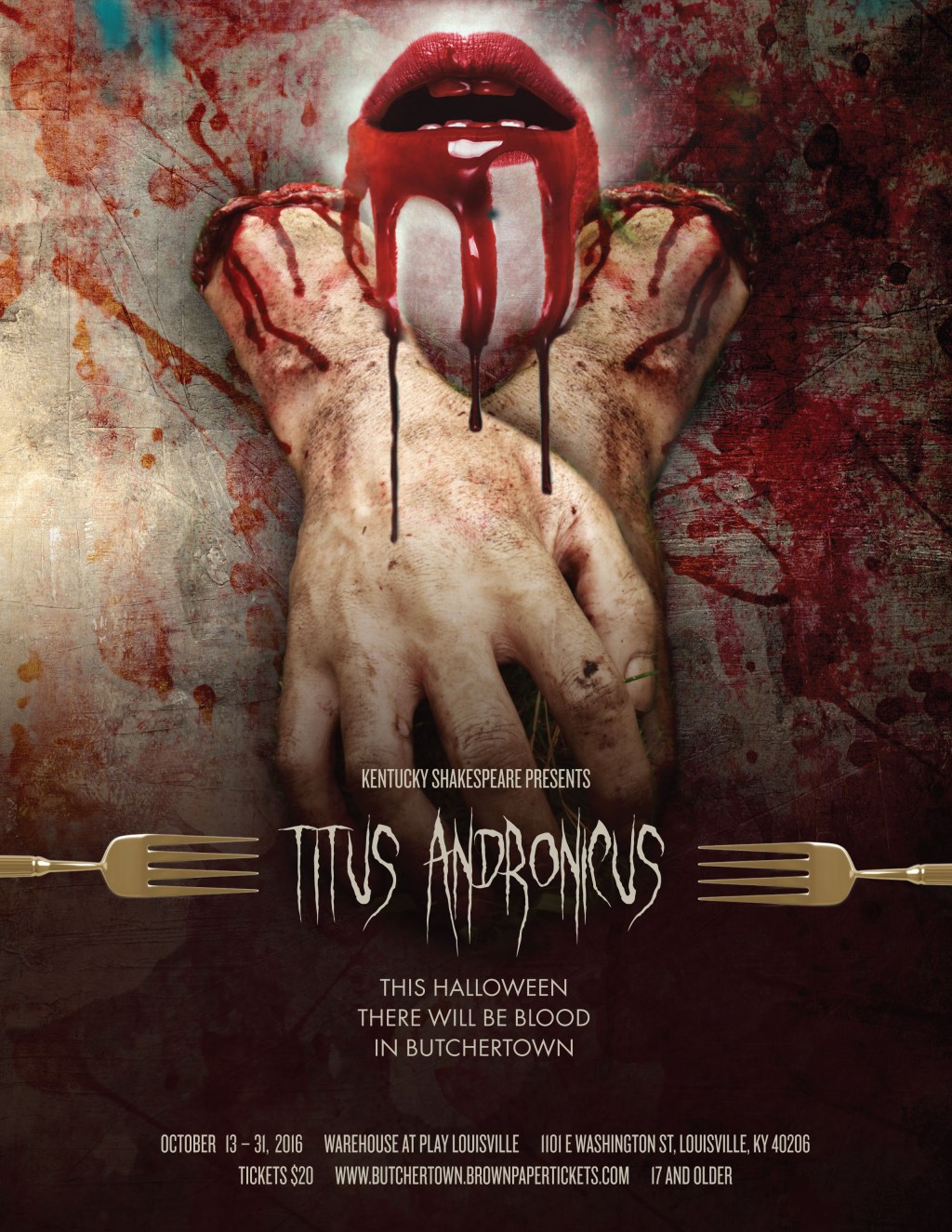 This week’s Marketing Monday post won’t be for everyone, especially if you have a weak stomach, so that’s why I decided to post today. For this week, let’s designate today, Wretched/Retching Wednesday.

In Hamlet Act 1, scene 3, Polonius offers this pearl of wisdom to his son, Laertes: “To thine own self be true.”

I’m sure the Bard would get a migraine at the thought of someone such as myself applying his words to a discipline as “dubious” to some as marketing, but as you read on, you’ll see that, at least I’m “keeping it in the family.”

Kentucky Shakespeare has quite the track record. The company was formed in 1949 as the Carriage House Players, and in 2013 welcomed Matt Wallace as only the seventh artistic director in its history. There are many impressive aspects to Kentucky Shakes, and the marketing geek writing here considers one of them the promotional campaign for their upcoming production of Titus Andronicus.

Don’t know much about this play? Get in line. It’s one of the Bard’s lesser-known (yet quite commercially successful) works. I daresay the former is, in part, because of the subject matter.

How bad is it? Likely one of the reasons it isn’t performed very often is that the budgets can’t handle the cost of all the fake blood necessary to pull it off.

That said, despite my usual lack of enthusiasm for artistic works that involve dismemberment, rape, cannibalism, and mass death, I am actually considering going to this production because the marketing campaign, I think, is inspired.

Kentucky Shakes has embraced the gore and added more than a dash or two of dark humor in the process. For your consideration …

It scheduled the production in October, when the public’s tolerance for the macabre is higher than say, Christmas or Easter.

Equally important with timing is location. As it happens, Louisville has the perfect spot for a tale of bloodletting and dismemberment: Butchertown. With such a name, I’m sure you’ll be shocked not a bit to learn that this part of the city is the former location of the Louisville Stockyards and adjoining meat packing plants. The production will occur in one of those long-empty-of-livestock warehouses.

Still not enough atmosphere? Consider this amazing poster that relegates any/all iterations of the Saw movie franchise to the “cute” category.

And, the piece de resistance, this yes-its-gross-but-I-can’t-look-away video.

A little uncomfortable with the visuals? Keep in mind that Kentucky Shakes hasn’t used its marketing to try to convince a prospective audience of an importance to Titus Andronicus beyond the value of the work itself. Would it make sense to treat the romance as an “aside” in marketing Romeo and Juliet, and instead try to sell it as social commentary on the enormous problem throughout the centuries of rich, powerful families bickering at one another in public?

Know yourself. Be true to yourself.

Key to that is a concise mission statement. (Kentucky Shakespeare’s is 25 words. Not bad for an organization centered around the works of arguably the most prolific and important writer in the history of the world.) How ever complex your work may be, you must be able to articulate your mission quickly and clearly.

Be aware of your surroundings, the calendar, and the news of the day as it relates to special events and promotions. Look for ways to capitalize, (such as the Halloween season and Butchertown for Titus,) and be sensitive to potential problems. (Example: after 9/11, Hollywood scurried to back burner the release of films about terrorism, airline disasters, and other subjects that could distress audience members.) Don’t try to create an edgy campaign in a vacuum. Get professional assistance, and make your pitch to a small, trusted group before spending big bucks and/or going public.

Critics will say that promotions similar to Kentucky Shakes’ Titus are lowest-common-denominator marketing. Certainly that type of promotion exists, but I don’t think it applies in this case. This disgusting-yet-compelling campaign is wedded, faithfully, to the roots of the play itself. As an outsider to theatre marketing, I would speculate that promoting without pandering is the brass ring of selling the works of William Shakespeare in the 21st century. I think our local company here has grasped it perfectly.

While I cannot offer blood, guts, and dismemberment for you and your cause (nor do I really want to!), I am here to help you develop a plan to market or promote your business or organization. Just give me a call.

About the images: “Chandos portrait” of Shakespeare, named for one of the work’s owners, James Brydges, 1st Duke of Chandos. (Public Domain)

The poster for Kentucky Shakespeare’s upcoming production of “Titus Andronicus” was created by Rosie Felfle, a board member and professional marketer/communicator with Kindred Healthcare in Louisville.