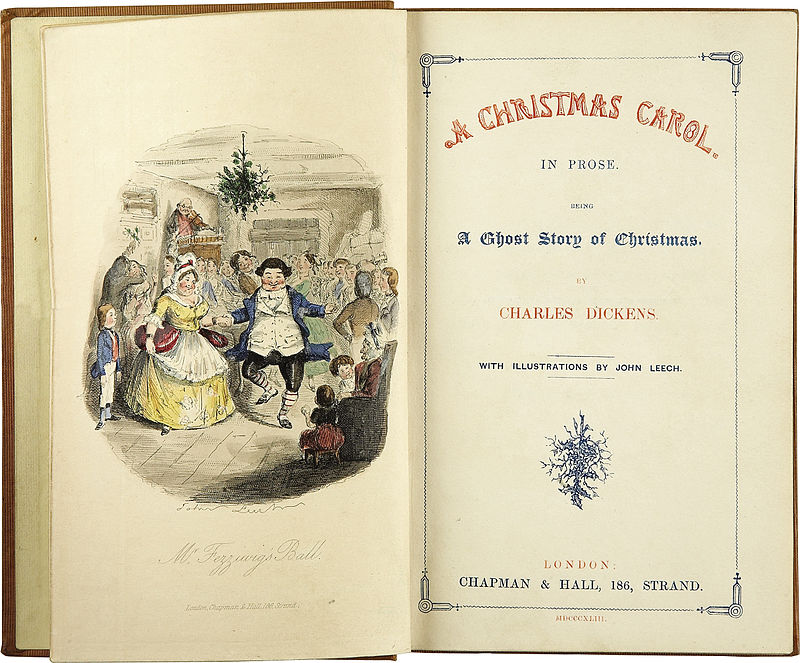 The frontispiece of the original printing of Charles Dickens’ A Christmas Carol. (public domain photo)

I love movies, but am no longer someone who “must” see a film on opening weekend; sometimes I’m even a year late.

Falling squarely in the better-late-than-never category is The Man Who Invented Christmas, which I missed in 2017 but now intend to add to my “best Christmas movies” collection.

The film follows Charles Dickens’ frantic and very bumpy road in writing A Christmas Carol. His family in dire financial straits, Dickens needed a bestseller. A frequent speaker on the charity circuit after the tremendous success of Oliver Twist, Dickens was keenly aware of society’s poorest of the poor, even as he wrestled with personal money woes.

In reference to the title of the film, obviously, the celebration of the birth of Christ pre-dated Dickens’ lifetime, but how the day is celebrated definitely was impacted by the novella.

With the success of the small book, Dickens inexorably linked the holiday with overt expressions of compassion and generosity toward the less fortunate. In a 1998 article, The Washington Post shared examples of the book’s instant impact in 1843. Here is just one:

A young Robert Louis Stevenson was beside himself after reading A Christmas Carol for the first time: “I want to go out and comfort some one; I shall never listen to the nonsense they tell me about not giving money— I shall give money; not that I haven’t done so always, but I shall do it with a high hand now.”

The book has never been out of print. It has been adapted for the screen dozens of times. It is performed on thousands of stages, small and large, every year. I would argue that every red kettle, every toy for a tot, is linked in some way back to this small book with its huge message.

I read it every Christmas, for no particular reason other than the sheer joy of experiencing Dickens’ words. Now, having watched The Man Who Invented Christmas, and having dug into the story behind the story a bit deeper, I love and appreciate it even more.

Just as the fortunes of every retailer rise and set on the period of Black Friday through Dec. 24, non-profits depend, mightily, on the public’s generosity this time of year. Without Dickens and his novella, how different that picture might be.

One thought on “A Dickens of an impact”