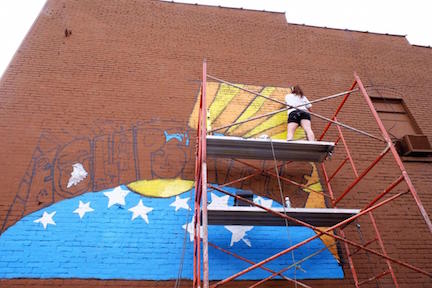 About the photo: Artist Amy Peters creates a mural in downtown Hopkinsville, Ky., in preparation for the 2017 solar eclipse. (Photo by Meredith Willse for the Kentucky New Era)

What do Oreo cookies and Mountain Dew® have to do with the hit HBO series Game of Thrones?

Absolutely nothing, but sometimes nothing is everything.

Unless you’ve been living under a rock, you probably know that the eighth and final season of Game of Thrones kicks off April 14. The build-up is saturating headlines, social media and conversation. What business wouldn’t want to take a ride on the hem of that cape?

GoT-themed cookies are just the tip of the marketing iceberg. To get an idea of how brands are capitalizing on the show, check out Rebecca Jennings’ article on Vox.

If something has captured the public’s attention, consider how your small business might make the most of it. A direct connection between your company and the event in question is good, of course, but if the event is big enough, that doesn’t matter.

The 2017 total eclipse was a big deal in my home state, Kentucky. Hopkinsville was the largest city in the area of greatest eclipse. The event was on the horizon, pun intended, for a while, so it gave businesses and non-profits a long time to squeeze every drop of potential from this once-in-a-lifetime opportunity.

What are people talking about in your community? Join a coffee klatch. Brainstorm with your fellow merchants or non-profits. Join neighborhood Facebook groups or Next Door. There might be something big on the horizon that takes your brand to the next level.