Hi, I’m Chip and I live in Louisville, Ky. My person’s name is on this blog but I think of her not as Dannah or Dannie but as Prue (Person Responsible for Ultimately Everything). Full disclosure: She’s keying this in for me and I’m quite susceptible to suggestion so the name could be all her idea.

She’s experiencing keyboard malaise (whatever THAT is) so she asked me to take over the blog every now and again. I’m happy to oblige. I’m full of keen insights in which too few individuals are interested. Very sad.

First things first: I’m male, although to be frank, I feel that there’s something missing from that part of my life these days. (Actually, maybe a couple of things are missing.) I’m a chihuahua, of course, but I’ve been specially blended with some sort of lucky terrier. And yes, my right eye isn’t like the left. Vets (and others) say I’m blind, either from birth, or from an accident or cataract after my debut, but they are wrong. My Magic Eye supplies various and sundry super powers, including amazing sensitivity, intelligence, and I can see colors. (The latter may be mostly because Prue finds it extremely difficult to write without mentioning color.)

I’m three (or 21 depending on which calendar you go by). I like women, of course, but (again), I have to admit I’m not sure why anymore. I am kind of suspicious of men and people who insist on running in my presence. There’s no excuse for moving that quickly. I’m also downright rude to most of my fellow critters and varmints. With very, very few exceptions, I’m the smallest of the crowd. My Magic Eye enables me to see thought bubbles above larger dogs’ heads with words such as “Snack,” “Appetizer,” and “Hors d’oeuvres.” I’ve tried repeatedly to explain this to Prue but she insists on apologizing to others for my vigilance and perception.

The exception to my varmints and critters aversion is squirrels. Those guys rock. I wish I could climb a tree like that.

As a person, Prue is about a seven on a scale of 10. She tries pretty hard but is overly fond of giving me baths. She’s an odd duck. One second she seems fascinated by my poo, going so far as to put it in a cute little green bag, then she turns around and tosses it into a dumpster.

I get too many brushings and too little cheese and actual meat, and she’s constantly worried about my halitosis. The latter actually suits me fine because it’s how I score Greenies and dog biscuits.

I have concerns in a couple of areas. In addition to my hyper-vigilance regarding other canines, she’s entirely unconcerned by strange or loud noises or the parade of suspicious characters walking past the windows every day. She says she appreciates my efforts at keeping her apprised, but sometimes I doubt her sincerity. Additionally, I strain against my leash with every fiber of my roughly-seven-pound being, but still she refuses to follow my lead. I know training is pricy, but I think we’re going to have to make the sacrifice. She’s just too headstrong.

Despite my rudeness to other canines, and some homo sapiens, Prue really likes to take me on walks. I like walks and enjoy embarrassing my person, so it’s a win-win for me. She has this “darling” little basket bungeed around the passenger seat of the car, too, so the drives to and from the parks are pretty dope.

My goal is to grace as many parks in the Metro with my presence (or presents?) as possible, so we’re starting a kind of travel log.

Today we went to Brown Park of St. Matthews, located at the intersection of Browns, Kresge and Hubbards lanes. The park is spitting distance from the I-64 & 264 junction and right next door to Baptist Health. Make no mistake, it’s noisy, but it’s a 28-acre gem snuggled up against the Middle Fork of Beargrass Creek, offering an oasis of trees, water, grass, many sizes and shapes of water fowl, and an atmosphere as American as apple pie.

Prue really likes to take photos, but this time of year, nothing that grows outside really looks good, so check out the Brown Park webpage on St. Matthews’ municipal site.

There are several paths that meander across one another, and the topmost takes you to the old Brown family cemetery. If you are wondering if the Browns were big doings in the ‘Ville back in the day, yes. The property for the park was donated by heirs of James Graham Brown. Nuff said.

The “bottom land” can get mushy, and when the city gets too much rain, it will flood, but the homo sapiens have cleverly positioned benches around the paths that look as though they came from a Bedford quarry, so as soon as the sun comes out and the creek goes down, we’re back in business.

In the center of the bottom land are big white-bark trees, which I think are birch, but as I’m not an arborist, it’s best not to quote me on that. They are quite impressive, as are the manmade stone formations that Prue says remind her of old stone bridges or some such. Landscape Architecture Magazine gave the park a big thumbs up in 1997.

You’ll see the traditional park benches up next to the gazebo and playground where it’s less likely to flood. (Prue said I should mention that there are port-a-johns, whatever those are, on site.) Even more than the playground, little humans love those ducks and geese hanging out by the bridge and causing a ruckus jonesing for bread crumbs. And the park gets some cool holiday lights a few times a year, which the kiddos also love.

Metro Louisville has a great park system and there are also gems like Brown that were established and are maintained by other municipalities, historical societies, community groups, special donors and the like.

While I cannot say in complete honesty that I’d “love to meet you and your pet” at a local park, Prue does, so if you get behind a trussed-up canine that looks like this

next time you are in the park, feel free to try to say hello. I make a lot of noise but I’ve never bitten anyone … that I can recall anyway.

Check out my backstory and don’t forget to support the Kentucky Humane Society this year. After all, pet adoption is for the cool people. 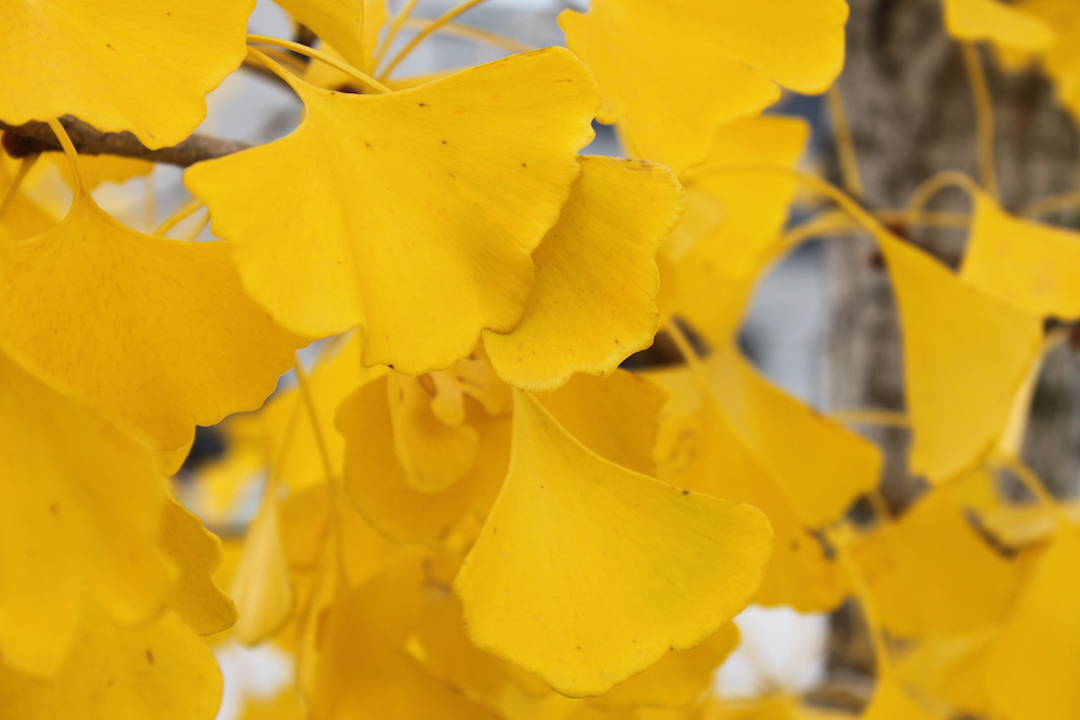 October was a temperature roller coaster in Louisville this year. Yes, it got seasonably cool but the mercury went right back up into late spring/summer temps for several days. Consequently, fall has been gradual and extended this year, and I am grateful. I’d seen some gorgeous ginkos not far from my home last year but missed getting pictures. The fact that the ground was pretty wet and the sky a bit gloomy on Friday didn’t dampen my joy at finding these beauties at peak. No photos can do justice to the real thing but here are my tries from last week.